About a week ago, we brought you news of Kwesta’s wife Yolanda’s pregnancy. Now we bring you news of the gender of the expected child. If you missed the previous news, you can check it out here.

Taking to Instagram yesterday 24 August, Yolanda shared a clip that revealed the gender of the child. It was pretty dramatic, but at the end of it all, fans got to know that the songstress is having a baby girl. You can check out the clip of the gender reveal below.

By the way, Yolanda already has a daughter with the platinum-selling artiste.

Khai Asemahle Bulelwa Vilakazi, Kwesta’s first daughter, was born 13 October 2012.that means she will be eight exactly two months from now. Incidentally, it is around the same period that Yolanda is expected to give birth to baby No. 2.

Kwesta, who has been expected since he announced his wife’s pregnancy, celebrated his 32nd birthday over a week ago. He is said to be working on new projects and might release two albums before the end of the year.

Well, we can’t wait to listen to what he has been working on and share same with you, too. you gotta stay tuned, peeps! 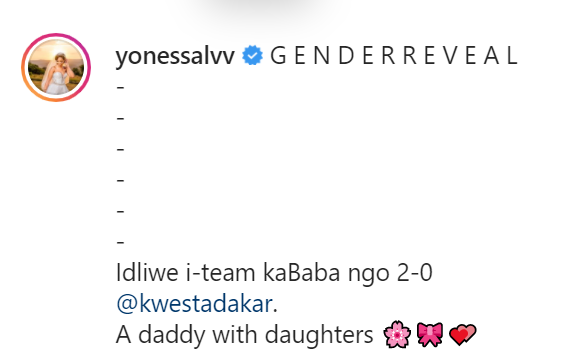 Tags
Kwesta Yolanda
John Israel A Send an email 25 August 2020
Back to top button
Close
We use cookies on our website to give you the most relevant experience by remembering your preferences and repeat visits. By clicking “Accept All”, you consent to the use of ALL the cookies. However, you may visit "Cookie Settings" to provide a controlled consent.
Cookie SettingsAccept All
Manage Privacy