American pop rock band OneRepublic is coming to South Africa’s city of Cape Town, and there is palpable excitement in the Rainbow Nation.

The excitement is understandable as the group last performed in South Africa in 2015 as part of their “Native” album tour.

In a post on its verified Instagram page, the group announced they are on tour and will be live in concert in several cities in the world, Cape Town being one of them.

The first leg of the tour will take them to Rishton Lezion in Israel, where they will perform at the Expo Live Park on November 8. 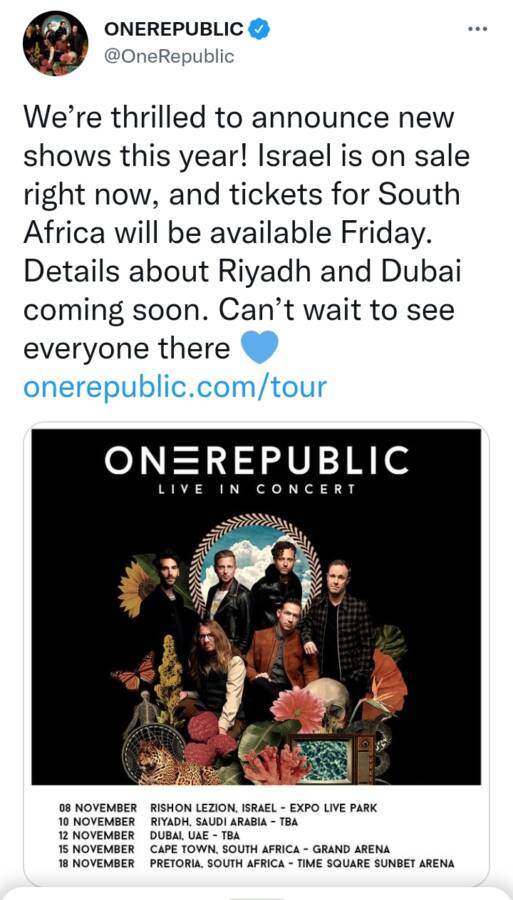 Two days after, on November 10, they would perform in Riyadh, Saudi Arabia, at the TBA. November 12 would see them perform in Dubai, United Arab Emirates, also at the TBA.

November 15 and 18 would mark the last leg of their tour. On the first date, they would perform in Cape Town, South Africa, at the Grand Arena.

On the last day, November 18, they would perform in Pretoria at the Time Square Sunbet Arena.

With preparations underway for the performance in South Africa, Mzansi tweeps have been sharing their delight about what is to come.

Well, we will be here to share more details with you all. Stay tuned.

Tags
OneRepublic
John Israel A8 June 2022
Back to top button
Close
We use cookies on our website to give you the most relevant experience by remembering your preferences and repeat visits. By clicking “Accept All”, you consent to the use of ALL the cookies. However, you may visit "Cookie Settings" to provide a controlled consent.
Cookie SettingsAccept All
Manage Privacy