Proverb’s restless quest for self improvement has just been rewarded. The songster has just completed a certificate in Tax Law at the University of Cape Town.

A delighted Proverb shared the news with his Instagram followers, stating the certificate has just dropped in the mail. 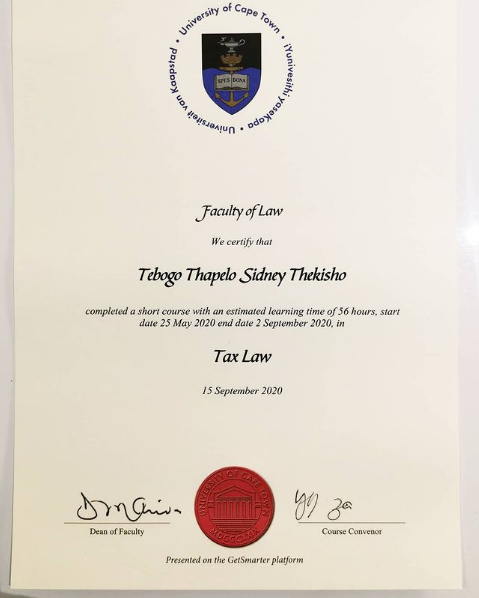 Fans and celebs alike were in the comment section of that Instagram post to congratulate him on his achievement. In South African music, Proverb is among the few who, besides music, also have their eyes on academic pursuits and have done well in the area.

From the look of things, it’s been one success after another for the songster. Just recently, he was nominated for and eventually elected to the South Africa Music Rights Organization (SAMRO). On his election, he had said he would use his position to promote the culture as well as cause necessary changes in the industry.

By the way, Proverb had once attempted when his ex-wife cheated on him. He is apparently in a better place right now.

Well, what do you think of Proverb’s new tax law certificate? Got some good words to share with the songster? You’re welcome to join the coversation by dropping your thoughts in the comment section below.

Tags
Proverb
John Israel A Send an email 17 December 2020
Back to top button
Close
We use cookies on our website to give you the most relevant experience by remembering your preferences and repeat visits. By clicking “Accept All”, you consent to the use of ALL the cookies. However, you may visit "Cookie Settings" to provide a controlled consent.
Cookie SettingsAccept All
Manage Privacy