Rethabile Khumalo finally opens up about the controversy surrounding her upcoming collab with Prince Kaybee.

Imagine having your excitement for something threatened. That’s what happened to fans of Rethabile Khumalo and Prince Kaybee after the news of their highly anticipated collab was soiled by claims made by another DJ.

DJ Trumpet had accused Kaybee and Rethabile of stealing his song. A song he revealed was written for him by the “Umlilo” star. Finally speaking out, Rethabile had a chat with TshisaLIVE during which she set things straight. She revealed that the song was written by her before she gained recognition.

According to her, she wrote the song lyrics and delivered the vocals while DJ Trumpet provided the beat. However, the collaboration did not work out, and both of them “took” their contributions and parted. She also accused the DJ of trying to drag her name because she has started working with big brands.

“The thing is as an artist you work on music over a long period of time and sometimes it doesn’t work out with a certain producer or vocalist. That is kind of what happened here, myself and that producer (Trumpet) came together to work on a song. He had his beats and I came with the lyrics and the vocals but then it didn’t work out.

“So he took his beats to work with someone and I didn’t have a problem … because they belong to him. But now that I have grown as an artist and I’m working with big brands such as Prince Kaybee, he’s trying to drag my name,”

“The good news is that Kaybee and I, we’re good now, and the song is still on track for release.”

“I’ve been hustling to get here in my career for a long time. From my days of trying to be an Idol to going to competitions like The Voice, I have been working hard for a moment in my career such as this and I won’t allow anyone to stop my shine.” 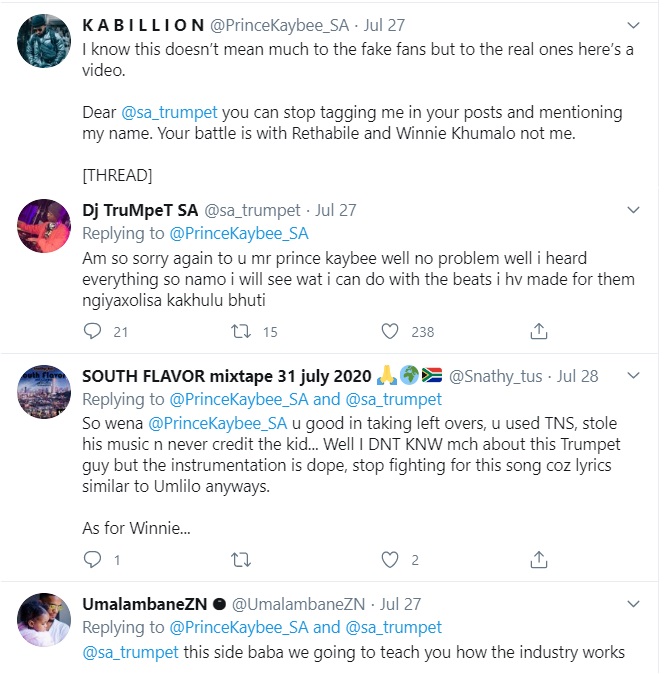 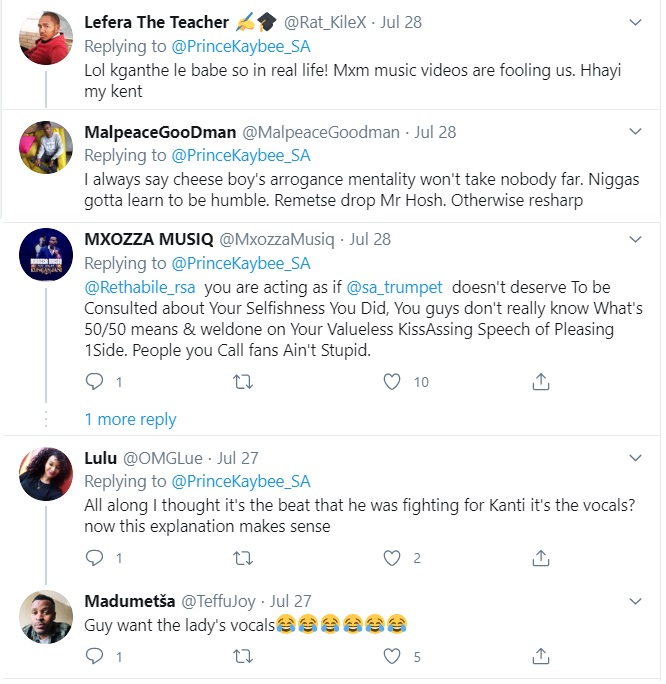 Tags
Prince Kaybee Rethabile
John Jabulani Send an email 3 August 2020
Back to top button
Close
We use cookies on our website to give you the most relevant experience by remembering your preferences and repeat visits. By clicking “Accept All”, you consent to the use of ALL the cookies. However, you may visit "Cookie Settings" to provide a controlled consent.
Cookie SettingsAccept All
Manage Privacy