Sun-El Musician further talking about the new song revealed he will be featuring Msaki on it and the song is bound to be released on the 29th of May 2020.

The announcement has gotten a lot of his fans really hyped up and they have expressed their anticipation at the release of the masterpiece.

The new song will be coming as a follow up to his “Uhuru” single featuring Azana released earlier in 2020. The producer is known for dropping topnotch songs over the years, so it’s no surprise his announcement got fans jumping for joy. Sun-El Musician took to his Instagram page to share a snippet of the song with a video of his online mix session. 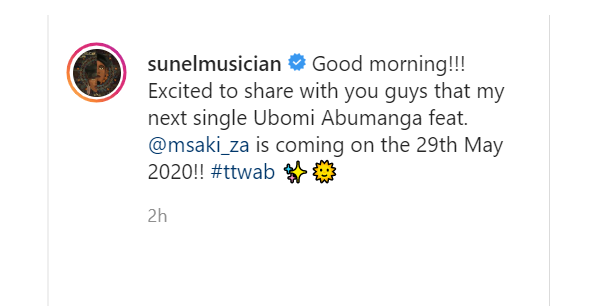 In other news, Sun-El Musician’s “Into Ingawe” single with Ami Faku has been certified double platinum by RISA.

Tags
Msaki Sun-El Musician
Wuraola Salawu Send an email 20 May 2020
Back to top button
Close
We use cookies on our website to give you the most relevant experience by remembering your preferences and repeat visits. By clicking “Accept All”, you consent to the use of ALL the cookies. However, you may visit "Cookie Settings" to provide a controlled consent.
Cookie SettingsAccept All
Manage Privacy