The demand for South African rappers Zakwe and Duncan’s vocal services has risen so high that the songsters have decided to raise their fee as a duo.

Previously, they used to charge R50,000 to be featured together. But that “promotion” is over now. According to Zakwe, in a post to Facebook, peeps who had not taken advantage of the previous R50k feature price would now have to pay the full sum, which is R8ok. 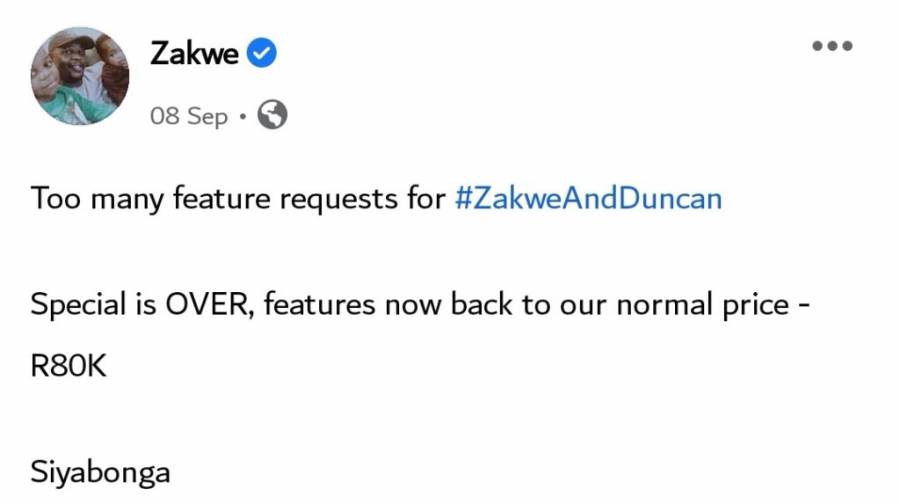 The post elicited mixed reactions from fans. While some said they deserved whatever they asked for, others thought they should stick to their old price as a duo.

Zakwe and Duncan used to be adversaries but they made peace in 2020, after about five years of conflict. They cemented their relationship by releasing the eponymous “Zakwe and Duncan” album.

They have not released another joint project since then but have been co-opted as guests by other artists.

By the way, the raising feature few is nothing new. Previously, Afrotainment boss DJ Tira had announced the increase of his feature fee to R100k.

What do you think of Zakwe and Duncan raising his feature fee? You’re welcome to join the conversation by dropping your thoughts in the comment section below.

Tags
Duncan Zakwe
John Israel A Send an email 22 September 2021
Back to top button
Close
We use cookies on our website to give you the most relevant experience by remembering your preferences and repeat visits. By clicking “Accept All”, you consent to the use of ALL the cookies. However, you may visit "Cookie Settings" to provide a controlled consent.
Cookie SettingsAccept All
Manage Privacy