Mihlali Ndamase is one of the luminous faces in the universe of South African fashion, creating beauty with her makeup skills where none might have existed previously.

Born in the Kwa Zulu-Natal to a fashion designer mother and a doctor father, Mihlali Ndamase grew up with her grandmother and aunt.

She attended all-girls boarding schools and obtained a makeup qualification from LISOF (Leaders In the Science Of Fashion).

She had reportedly been watching videos of makeup and fashion since she was 14, so the decision to become a video makeup blogger came naturally to her. She opened a YouTube channel and found fane there with her makeup tutorials. Her fame soon extended to Instagram, a platform where she now has over 1 million followers.

Some celebs are famous for hiding their ages. Well, Mihlali Ndamase might be counted among those who are just indifferent to the number. They are just too busy flying to bother about what the date is.

At any rate, it has been said that the celebrated makeup artist was born on 26 November 1996. This makes her about 24 years.

Mihlali Ndamase has been linked with a couple of equally famous celebs out there. At some point, she had been linked to the famous Formula One driver Lewis Hamilton.

She had attended the Grand Prix in Singapore and watched Hamilton zoom to victory. After that, she had tweeted about the race and the man, fuelling assumptions they were dating. But, in an interview, she said it was just for fun; she was merely “trolling”, and they had no relationship whatsoever.

And Banele Mbere? The makeup queen has allegedly dated the DJ and producer and one member of the two-member group Major League DJz. He reportedly bought her a pair of Louboutin heels on her last birthday.

You can check out the interview on her relationship status in the video below.

She was recently linked with Leeroy Sidambe. Loved-Up Photo Seemingly Confirms Mihlali Ndamase and Leeroy Sidambe’s Relationship but she has not come out to clarify it

Mihlali Ndamase’s father is a doctor. Her parents separated when she was much younger, and her father moved abroad. Her relationship with him became formal because they had to communicate via phone calls and email.

In 2018, as they began to get closer, however, her father died. He was said to have taken his one life after an extended bout of suicidal ideation. It wasn’t very pleasant for her at the time. And even now, she is often moved to tears recalling this family tragedy.

She does not have a child at the moment, at least to public knowledge. 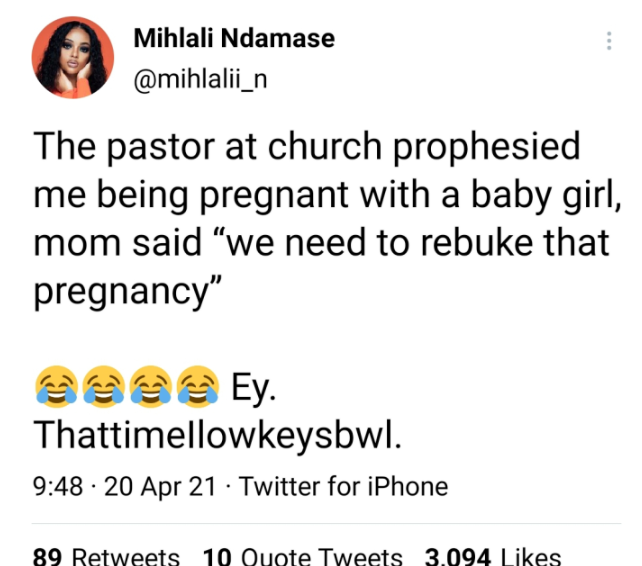 I foresee your pregnancy announcement next year 🤭😂

It has been said That cars define some celebrities and their brands. Some peeps would tell you they can determine a celeb’s current station by the type of car they drive and the house they live in.

Noted for her high taste in fashion, Mihlali Ndamase should have an equally high taste in cars. The YouTube content creator and social media influencer reportedly own a Mercedes Benz sedan which she bought in 2017. I love Mercedes so much.

I just dropped my car off for service and I’m walking thru the dealership drooling, the cars are so BEAUTIFUL 😭😍

A year later, she had bought her surviving parent, her mother, a Jaguar XE. According to Mihlali Ndamase, her mother deserves everything.

Although Mihlali Ndamase currently has a Mercedes, her dream cars are a Bentley, a G Wagon and a Porsche. We expect these will soon be in her garage.

By the way, the beauty influencer is said to live in a mansion in an expensive area of Johannesburg. She is an avid traveller, though, and has visited several parts of the world, including Thailand.

With COVID-19 limiting prospects of travelling abroad, Mihlali Ndamase is home and bidding her time.

Tags
Mihlali Ndamase
John Israel A Send an email 7 June 2022
Back to top button
Close
We use cookies on our website to give you the most relevant experience by remembering your preferences and repeat visits. By clicking “Accept All”, you consent to the use of ALL the cookies. However, you may visit "Cookie Settings" to provide a controlled consent.
Cookie SettingsAccept All
Manage Privacy