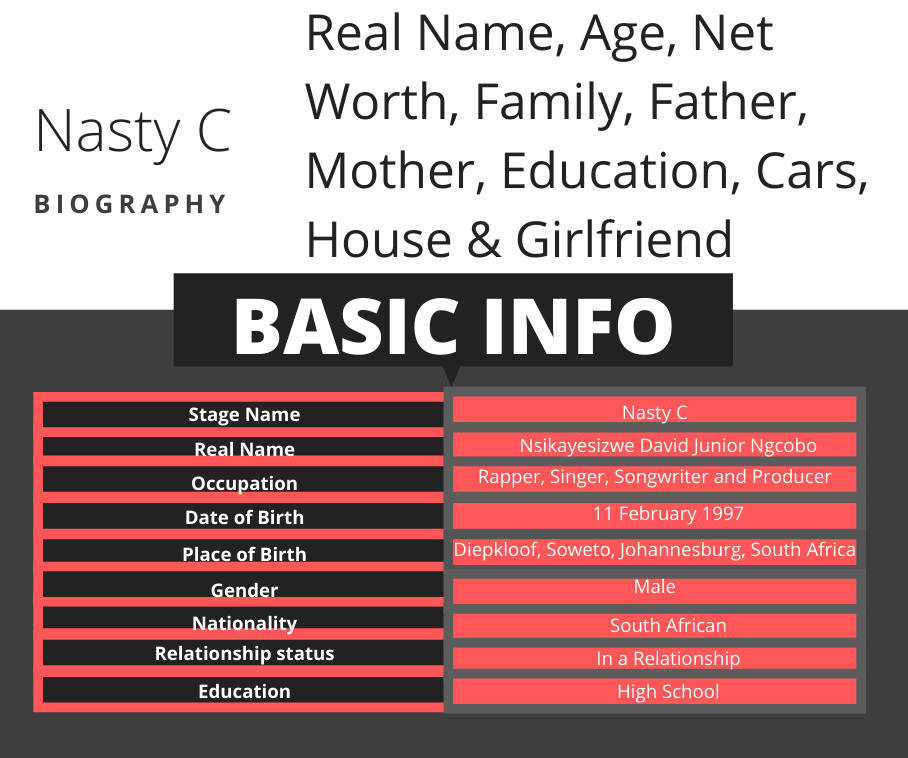 Born on the 11th of February 1997,  Nsikayesizwe David Junior Ngcobo, popularly known by his stage name Nasty C, is a prolific rapper, singer, songwriter and producer from South Africa. His genre of music is rap, which he performs majorly in English and sometimes adds his native dialect. He is popular for his hit single “Juice Back,” which shot him into fame. He is also known as the new kid on the block and is one of the best rappers in the rap game in South Africa. He was the youngest person to get an award at the South African Hip Hop Awards for Best freshman in 2015. He has performed on major stages both locally and internationally with top artists worldwide.

Nasty C is originally from  Diepkloof, a small town in Soweto, Johannesburg. However, he had to relocate upon the death of his mother. At the same time, he was 11 months old, so he grew up fully in Durban, Kwa-Zulu Natal and was raised by his father, David Maviyo Ngcobo, a human resources manager. His father was not a fan of his music until he began to make it into the industry.

He also has a sibling, an older brother named Siyabonga Ngcobo. Siyabonga had a major role to play in his music career, as it was him who taught him to rap and produce music at the early age of nine.

His mother, Veliswa, also called Ivy, died in a car crash when he was only 11 months old. He dedicated the song “UOK” to her. He describes her as a “good ancestor”.

Nasty C is a high school graduate; he attended Strelitza secondary school at Lotus Park in Durban. Although his major love was music, he was also good with his studies and balanced both until he graduated his 12th grade. He started rapping at the early age of nine while performing in variety shows and competitions in school.

Nasty C got his major music break after releasing his hit song “Juice Back”, which received a major reception from his music fans and got him nominated and winning awards. Music for him started at an early age, his brother’s love for music had an effect on him, and at the age of 9, he could rap and do some mini production. At 15 years, he released his first mixtape tagged “One Kid, a thousand Coffins”, which was released officially on the 14th of May 2012. He then released the Levitating Above My Enemies (L.A.M.E), officially dropped on the 4th of April 2014. His works received major acceptance upon their debut, and the artist didn’t disappoint in releasing absolute hit songs.

Nasty C, since his debut, has released three albums, of which some have been ranked tops. His recently released album is Zulu Man With Some Power.

This is his debut studio album/EP, released officially on the 2nd of December 2016. The album featured four songs, including his lead song “Allow”, which saw him join forces with American rapper French Montanna. The album received a lot of nominations at the BET awards in 2017.

This was his second project released on the 6th of June 2018. Nasty C had earlier pre-released two singles which later featured on the album. The album had “Jungle” and “King”, which featured American rapper ASAP Ferg. The album also featured the highly acclaimed “Send Me Away” (SMA), which saw him team up with Rowlene.

This is his soon to be released album which has got all his music fans talking and anticipating. He released “God Flow”, the lead single in the album featuring Crowned Yung, on 20th September 2019 and has assured fans that he is working on the finishing touches and will be releasing it for 2020.

Nasty C, since his debut, has released more than 50 songs and has Two studio albums (with a third in view). Here are his best songs, in no particular order;

Nasty C is in a relationship. He has been dating his girlfriend named Sammie Heavens since 9th grade and is not shy to show her off on social media now and then. 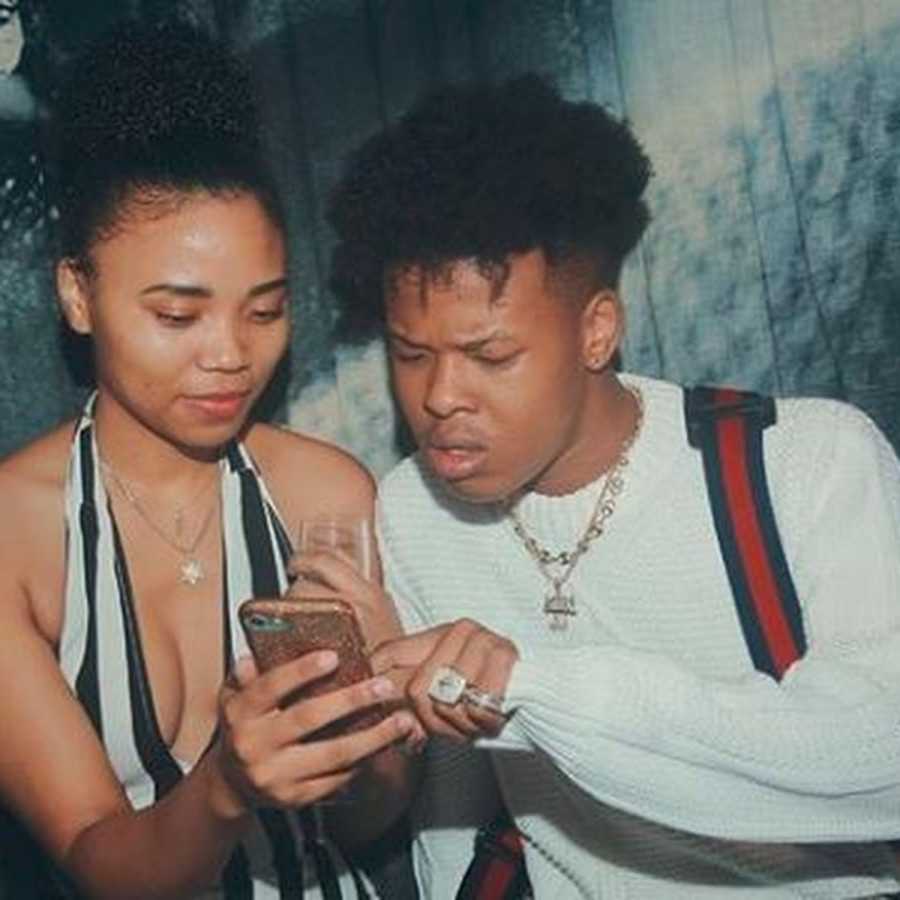 Nasty C, since his debut, has gotten various awards and recognition, among these are;

He has also gotten himself various endorsements with top brands in South Africa. An example of this is his ambassadorial role with AXE men SA.

Nasty C’s Net worth is estimated at 1.2 million dollars, i.e. 18,093,240 rands. This is calculated from payments for show performances, album sales, Money made from his Youtube views, endorsement deals, Properties and investments he owned. The artiste is doing well financially and is one of the top artists in South Africa to reckon with.

Nasty C is known to love the good life. He purchased his first whip, a green Mercedes Benz, in 2017. He bought another one in 2019. In addition, he is known to own a shark in his house.

I wonder how big is nasty c shark now?? pic.twitter.com/KzvwVujFWF

Nasty C’s songs from his albums are available on all major platforms such as Spotify, Apple Music, Youtube, etc.

Nasty C has proved himself unique in his genre, and his music has been recognized both in South Africa and Internationally. He made his mark with his song releases and albums. He is one of the top artists in South Africa to reckon with.

Tags
Nasty C
Wuraola Salawu Send an email 21 January 2022
Back to top button
Close
We use cookies on our website to give you the most relevant experience by remembering your preferences and repeat visits. By clicking “Accept All”, you consent to the use of ALL the cookies. However, you may visit "Cookie Settings" to provide a controlled consent.
Cookie SettingsAccept All
Manage Privacy